Best Gas Can For Garage Projects 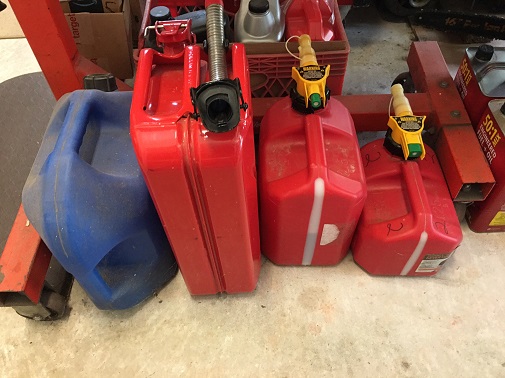 My requirements call for several types of fuel to be on hand. The main gas can is for regular-grade gas, which I need for the lawn tractor, lawn mower, pressure washer, and small engine projects.

A second gas container is for premium fuel (motorcycle and old car projects).

A 5-gallon can was needed for our portable generator, which is run when the power goes out. When needed, it may run 24 hours or longer, so I want enough gas on hand for such emergencies. 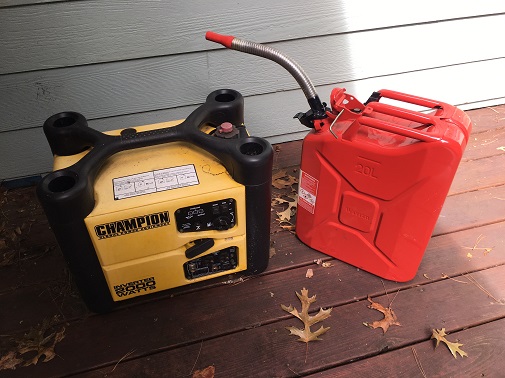 I eliminated the need for the fourth and fifth cans (40:1 for chain saw and 50:1 for leaf blower) by buying canned two-cycle fuel.

Starting in 2009, all portable fuel containers sold in the U.S. had to meet new CARB regulations. The premise was noble - to help the environment by not having gasoline spilling and being wasted, and to contain harmful gas fumes. They also had to have child-proof caps, which meant they were a little harder to open.

So the premise was good, but the implementation was poor. Many, if not most CARB approved gas cans are poorly designed so they can be sold cheaply.

So, the CARB approved gas containers still leaked and were now harder to pour. This prompted consumers to unscrew the nozzles and pour the gas through a funnel, thus defeating the point of the no-vent nozzle. All that was really attained was that they were a little harder to open.

I began doing research on CARB approved gas cans that don't leak. The first question was, which is better, plastic or metal gas containers?

Plastic gas cans are light and inexpensive, and their affordability makes them popular. But plastic gas jugs can swell when subjected to extreme heat, and get brittle when it's very cold. Gas kept in metal containers withstand extreme weather better.

Gasoline keeps freshest in a sealed metal container. So, for my emergency generator gas, I bought a metal Jerry can.

For my premium fuel storage needs, I bought a 2-1/2 gallon NO-SPILL gas can. It really is a no spill container, and most of the time I don't even need a funnel because the gas pours out so smoothly. 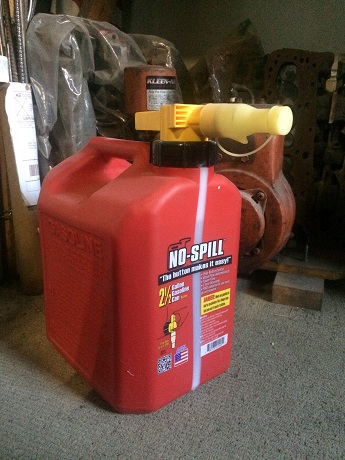 A nice feature on all NO-SPILL gas cans is the thin vertical translucent strip on the front. This lets you see at a glance how much gas is left in the container. 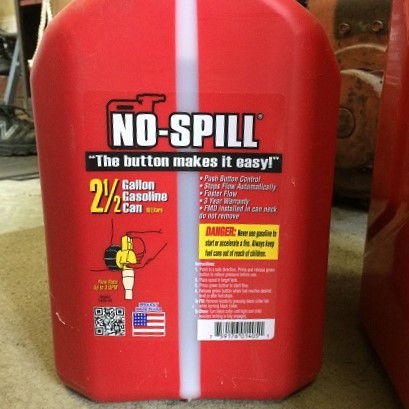 The SURE-CAN gas container is an interesting alternative to conventional gas jugs. Offered in several sizes including 2.2 gallon, it's the only gas can that dispenses fuel from the bottom of the can. It won't spill because you're not tipping it. The flexible hose twists up and down. 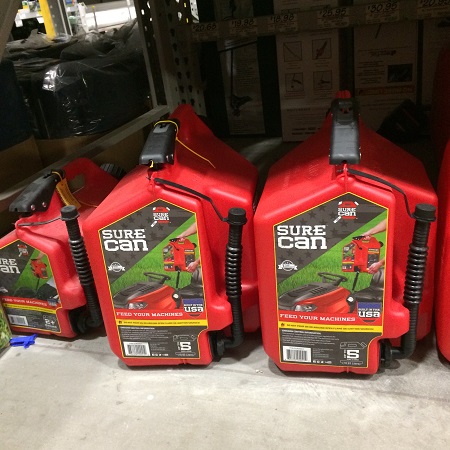 The rotating spout also lets you to see into the receiving tank, so you don't accidentally overfill and waste gas. The SURE-CAN is self-venting and has a thumb trigger.

Since World War Two, the metal "Jerry Can" has been the world standard in portable fuel storage. They are extremely well designed, rugged and safe, and is simply the best metal gas can to have. I found that the Wavian Jerry Can is the only military-grade EPA and CARB compliant Jerry Can on the market. 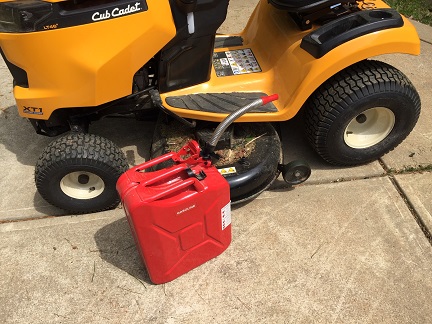 Best Metal Gas Can (Runner Up)

I considered buying the JUSTRITE five-gallon gas can, mainly because it was less expensive than a military-spec Jerry Can. The Justrite 7250130 is a five-gallon (19 litre) gas container made from high-grade coated steel, and each one is tested to guarantee 100% leakproof construction. The outside of the can is powder-coated. 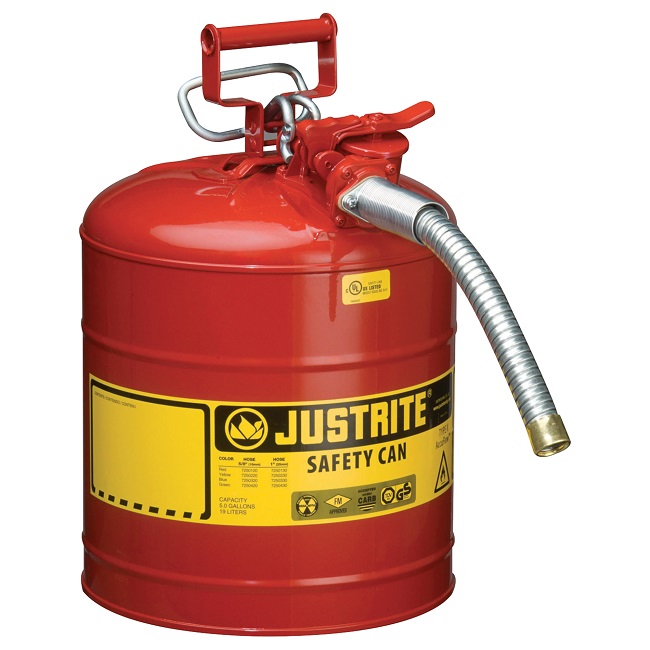 The JUSTRITE can features a safety squeeze trigger. The sealed lid has an automatic positive-pressure relief that vents between three and five psi to guard against rupture or explosion. This "Type II" gas container comes with a one-inch flexible spout, and meets OSHA & NFPA standards. Measurements on the five-gallon Justrite can are 11.75" outside diameter and 17.5" in height.

The pump gasoline we buy today has a short shelf life - sometimes only 30 days. Ethanol-blended gas should be your last choice for stored fuel.

At first, I favored the 2-1/2 gallon NO-SPILL gas can over the larger and heavier Jerry can. Then I upgraded from the standard spout to a flexible jerry can spout. The nozzle diameter was designed to fit into automotive unleaded gas spouts, but still allows quick pouring without glugging and air buildup. 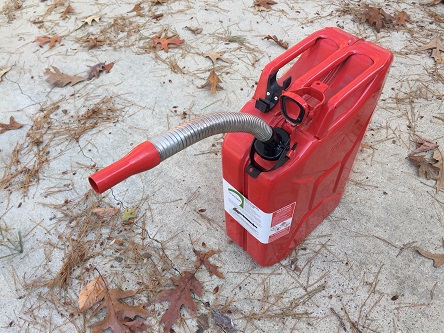 The Jerry Can is now easy to pour, even when full. 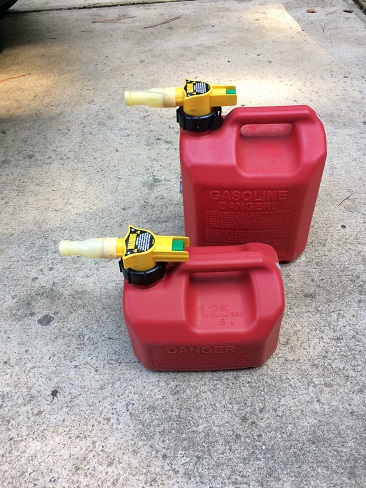 Stored gasoline should be rotated every 3 to 6 months. If the generator was not run and the gas not used, I pour it in my daily driver or lawn tractor's gas tank, then refill the Jerry Can with fresh non-Ethanol as soon as I can. 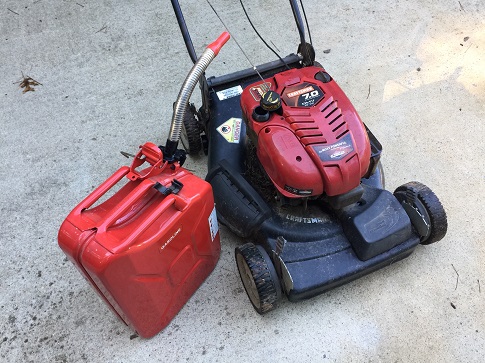 All gasoline containers must be red. This is for your safety. If your house caught on fire when you weren't home, a fireman can quickly spot them and remove them.

TruFuel is a high-octane, ethanol-free fuel/oil mix with an added stabilizer. The mix is precise and it's alcohol free. It has a shelf life of up to 2 years. 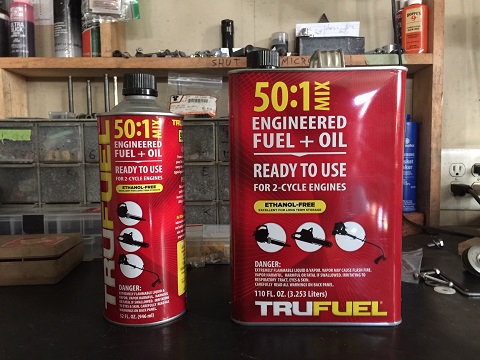