When the third-generation Corvette debuted in 1968, gasoline was cheap, motors were big, and few people worried about gas mileage. Throughout the decade of seventies all of that changed, but Chevrolet was still able to keep their fiberglass-body sports car relevant, and sell more models than ever before! 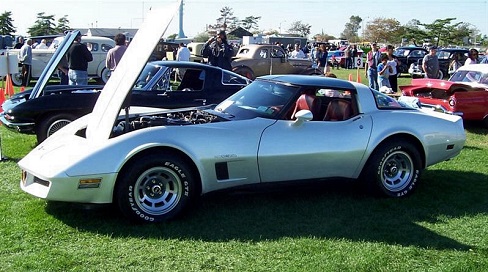 For 1978, a new roofline and fastback not only added looks, but increased visibility and luggage space as well. Slight performance gains were seen through use of a lower restriction exhaust system and a dual-snorkel air cleaner. The addition of a glove-box was a welcome interior upgrade.

To commemorate Corvette's 25th year in production, special commemorative emblems were added to the nose and deck on each of the 47,667 Corvettes manufactured this year. Two Limited Edition models were offered, the Pace Car replica and the Anniversary Edition.

Since its very first running in 1911, the annual Indy 500 race has chosen a pace car to lead the race cars around the first lap. Corvettes have paced the Indy 500 more than any other car.

The first Corvette pace car was 1978. 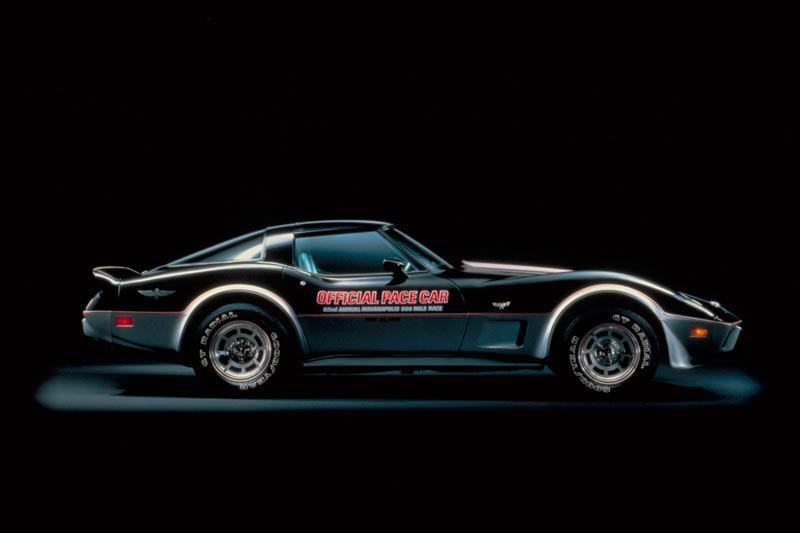 Originally intending to build only 2,500 Indy pace car replicas (a hundred for every year of production), Chevrolet eventually built a total of 6,200, one for each dealership. The Corvette pace car featured special black-over-silver paint, alloy wheels, raised-white-letter Goodyear tires, and front and rear spoilers. Exterior decals were installed by the dealer at the owner's request. 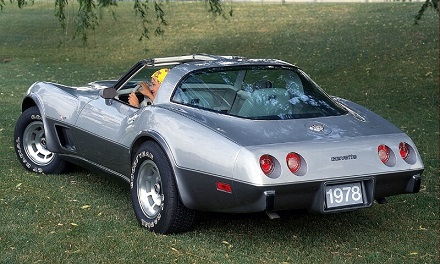 The second Limited Edition Corvette for 1978 was a two-tone, silver-over-grey Silver Anniversary model. Raised-white-letter tires and alloy wheels were standard, as was a color-matching silver interior. Tinted glass roof panels, optional on regular models, were standard on both Limited Edition models.

A redesigned front-end included an integral air dam and three-piece spoiler, which improved radiator airflow and lowered the car's drag coefficient from 0.50 to 0.44. A rear spoiler was built into the redesigned back panel. Air conditioning, power windows, and tilt-telescopic steering wheel were now all standard equipment. Cornering lights appeared on the front fenders. 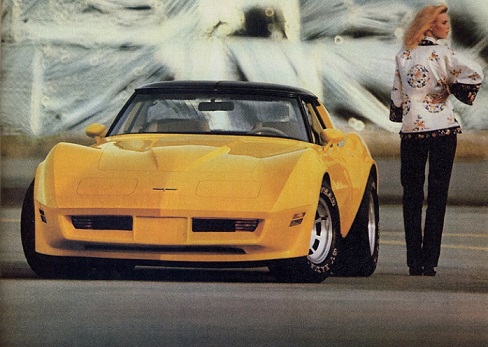 Engineers found ways to lose nearly 250 pounds off the car, such as switching from cast-iron to aluminum on the intake manifold and differential housing. At 3,495 pounds, it was the lightest Corvette since 1968.

The 305 Corvette/California motor was only available with a three-speed automatic transmission. As a consolation, buyers were credited $50, but were also required to buy a state emissions certification for $250.

The U.S. oil crisis of the seventies and ever-increasing emissions laws made fuel efficiency a priority. 1981 marked the beginning of computer-run engines, providing better fuel metering and driveability.

The Corvette was one of the first GM models equipped with the new Computer Command Control system. In contrast to the old days with seemingly endless engine choices, there was only one engine offered, the L81 350ci small-block V-8 producing 190 horsepower.

Further weight reduction was seen by replacing the steel rear transverse spring with one made from reinforced plastic. Manual-shift models kept the multi-leaf steel spring, as did those with the optional Gymkhana suspension. New stainless-steel free-flowing exhaust manifolds weighed 14 pounds less than the previous year's cast-iron manifolds.

Although early eighties Corvettes were capable of 120+ mph, speedometers only went up to 85 mph. It was part of a federally mandated attempt to slow cars down, and in doing so, save gas. 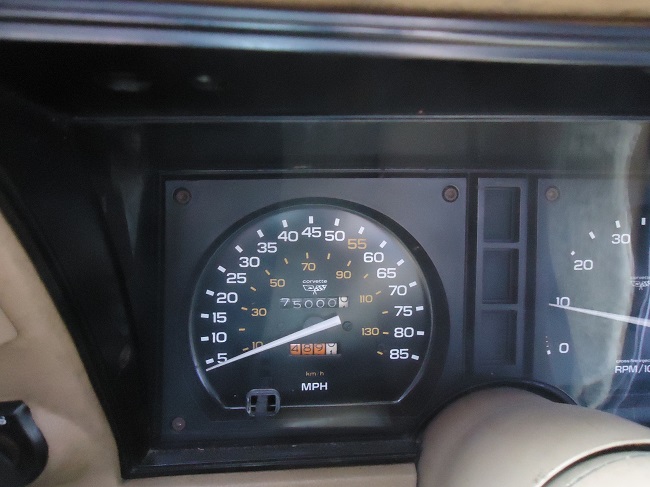 In June of 1981, Corvette production transferred from St. Louis to Bowling Green, Kentucky. The new state-of-the-art facility, covering 212 acres, was a giant step in reversing the car's reputation for sub-standard quality finish. Lacquer paint was phased out, with all Corvettes now finished in durable two-stage enamel.

An on-going dispute between Chevrolet and Borg-Warner, combined with the all-new fourth-generation Corvette due out the following year, prompted Chevrolet not to offer any transmission options this year. GM's new 700R automatic transmission was installed in all 1982 cars. The four-speed overdrive unit helped achieve the quickest acceleration times since the 1974 Corvette, and at the same time return its best fuel-mileage yet.

Increased pollution regulations, along with rising gasoline prices, led to Chevrolet's return to fuel-injected motors in 1982. The 350ci L83 Crossfire motor featured two cross-mounted throttle-bodies, one for each bank of cylinders. A cross-ram intake manifold was designed to quicken the velocity of the air/fuel mixture ratio. 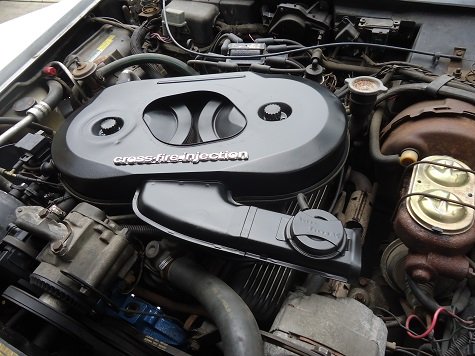 Engine compression was raised from 8.2:1 to 9.0:1, helping boost engine output. The exhaust system was reworked, and an electric fuel pump mounted inside the gas tank replaced the mechanical style pump. At full throttle, a solenoid-operated trap door opened under the hood and allowed cool, cowl-ducted air into the motor.

Although a far cry from the sophisticated engines of today, the Crossfire Injection system helped raise horsepower figures to 200 and produced a respectable 283 lb/ft of torque. 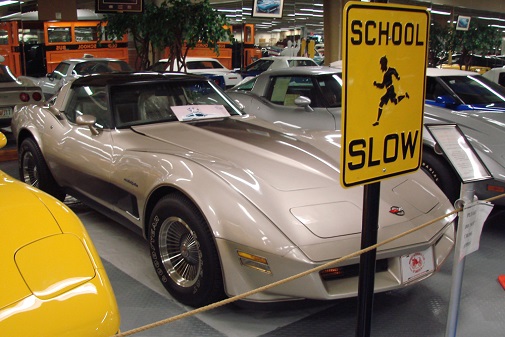 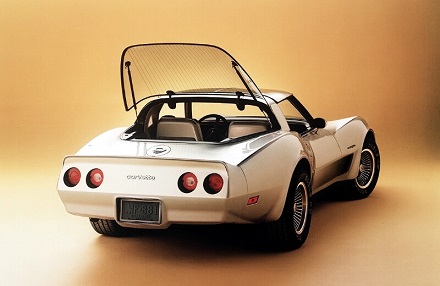 Early 80's Corvettes still turned people's heads, but underneath was a twenty-year-old frame and suspension. Anticipation of the fourth-generation Corvette, coupled with the worst economic recession America had seen since the Great Depression, made the 25,407 units sold in 1982 the lowest in over a decade.