Just like a brake master cylinder in an old car, the seals in a floor jack wear out over time and it stops holding pressure. 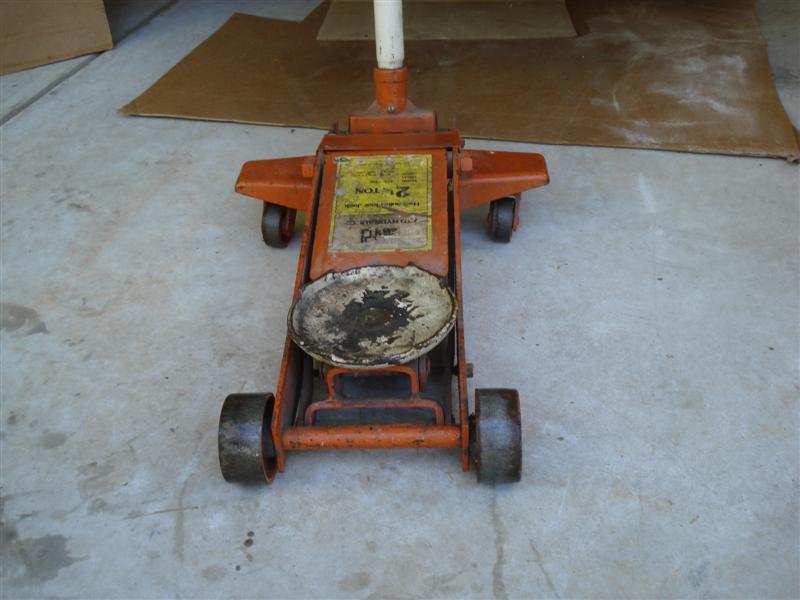 The good news is many can be rebuilt, provided internal parts are not damaged and a rebuild kit is available.

Hydraulic jacks work as a result of fluid being compressed inside the cylinder. As the handle is pumped, the cylinder "pressurizes" the hydraulic fluid, producing adequate force necessary to lift a vehicle. When hydraulic jacks get old or have seen lots of service, the rubber seals and O-rings wear out and can no longer hold pressure.

Before assuming your floor jack needs a rebuild, look for any external oil leaks around the pump. Check if the fluid is low. 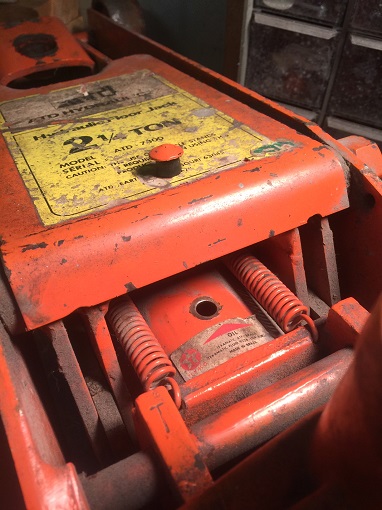 The port where fluid goes in (and comes out) is often hard to find. It's located in different places on different floor jacks. The port on my jack was hidden under a cover.

Although my jack was dry on the outside, it was pretty low on fluid. I filled it up and bled the system, but it still wouldn't hold pressure.

Sometimes air bubbles get trapped in the system, which prevent it from holding full pressure. To purge the jack of air bubbles, open the release valve fully (turn handle CCW), then work the jack handle up and down several times while leaving the valve open. 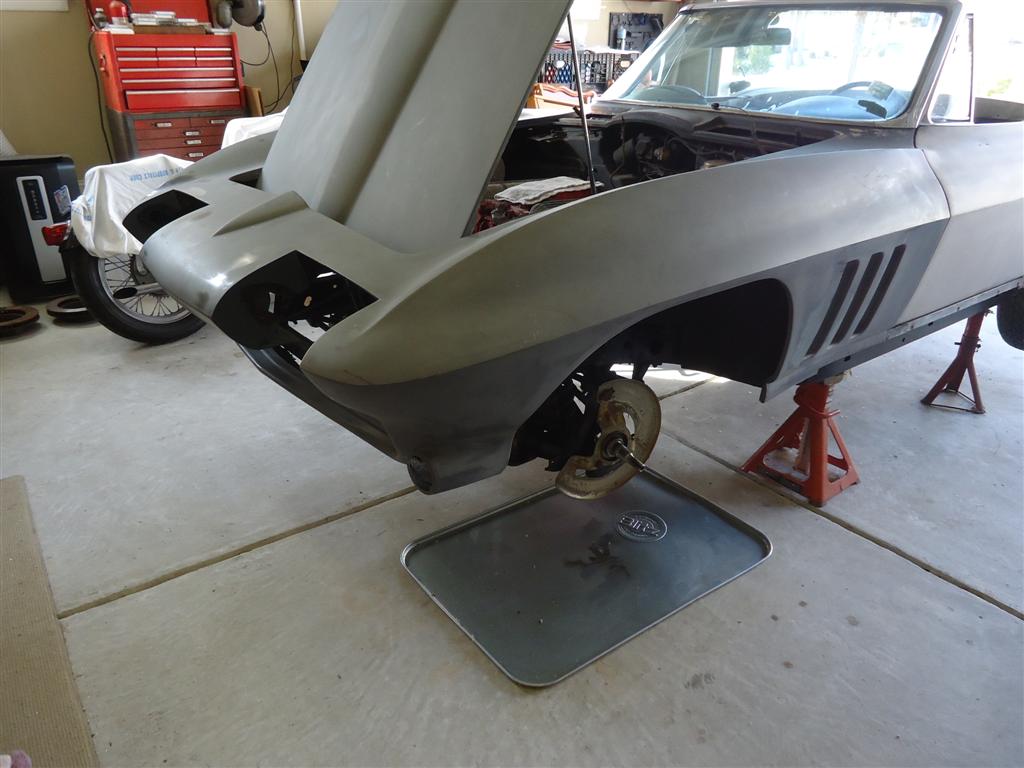 If your floor jack has no external leakage, and filling it with oil and purging the air doesn't solve the problem, the seals in the pump need replacing.

Although I had never rebuilt a floor jack before, I decided to try it. The way I figured it was, if I tried to rebuild it and failed, at the very most, I've wasted a few hours and the cost of the rebuild kit. And at the very least, I could sell the floor jack for scrap metal now that it's disassembled (scrap dealers won't accept assembled floor jacks).

Before you start, make sure a repair kit is available for your particular floor jack. Sometimes it's hard to tell the make and model because it's so old and worn. Seal kits are readily available for major brands like Lincoln, Walker, and Hein-Werner. If yours is an overseas unit, a seal kit may be harder to find.

My floor jack is an ATD model 7300, made in Brazil, and rated at 2-1/4 tons. I bought the repair kit online from Lazzar's Floor Jack Supplies. Their website features illustrations of many different brands and models of floor jacks, which you can download for free. 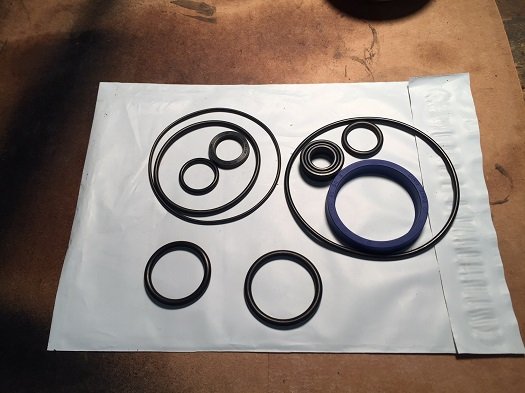 The repair kit was $40 plus tax, plus $7 shipping. Parts kits generally include all O-rings and seals needed. After ordering the repair kit, I began disassembling the jack.

Pictured are most of the tools I used to repair my old floor jack. Pulling out the old seals was done with a 90 degree "picker-outer" tool (not shown). 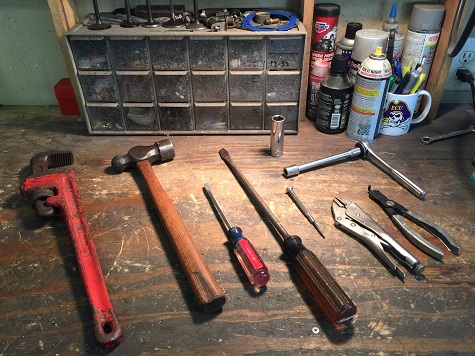 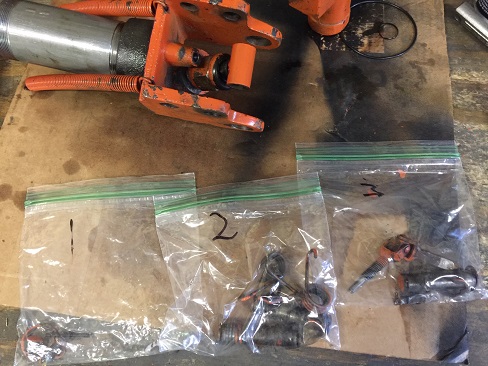 During disassembly, I separated the parts and put them in marked sandwich bags. This made reassembly much easier.

Procedures for removing the jack from the frame will vary. On mine, it involved the following: 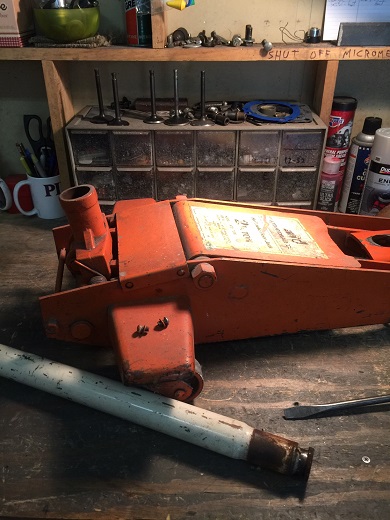 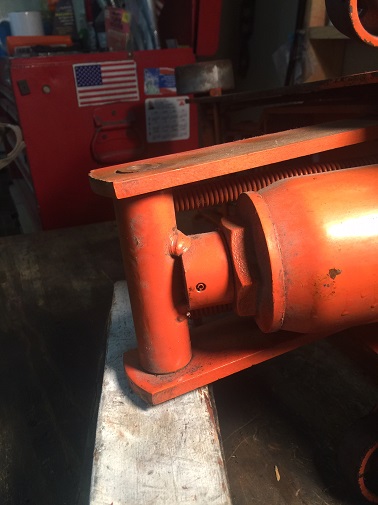 I started with a drift pin punch, but the pin started to distort and got stuck. I was able to grab it from the other side with a pair of pliers and pull it through. 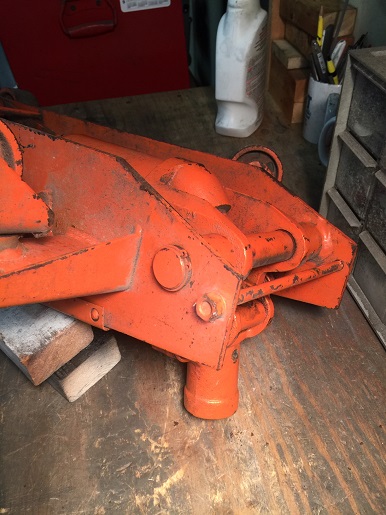 After removing an E-clip from one side, I knocked the axle out through the other side. 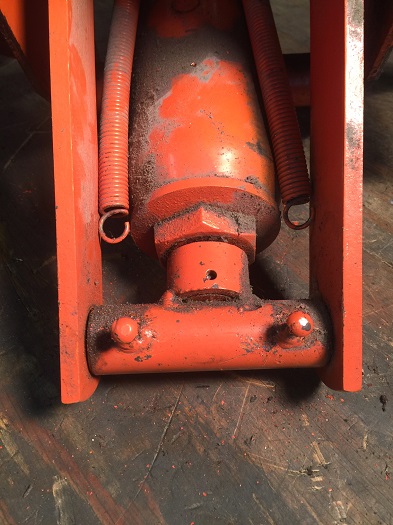 I thought the long springs would be under heavy tension but they weren't. 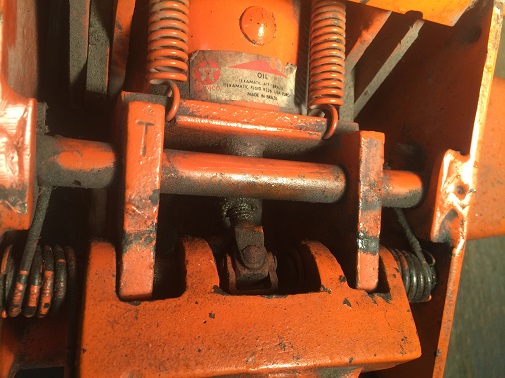 The two short springs can be removed after the jack is removed from the frame. 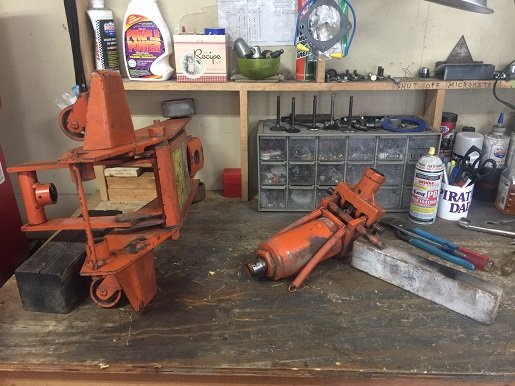 Once the jack was out of the frame, I turned it over and drained the old fluid into a plastic container.

On the top of the pump is a big shouldered nut, called the head nut, which the lift piston slides in and out of. I didn't have a wrench that big, so I used a large monkey wrench. 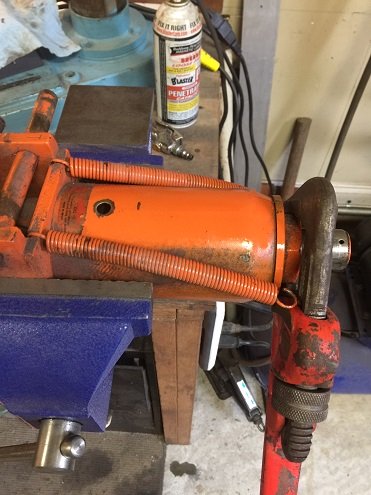 Once completely loosened, the head nut came off with the lift piston attached to it. Sometimes getting them apart is a hassle, but in my case, the piston came out with little resistance. 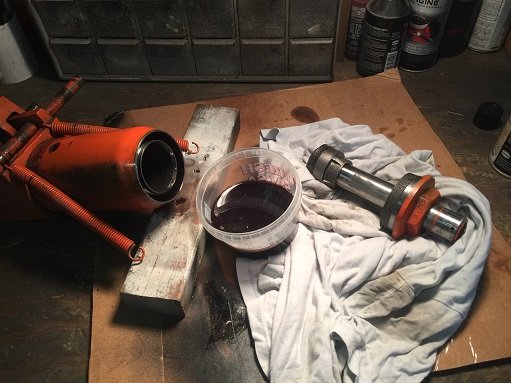 Notice if the old fluid is foamy or milky. That's a sign of moisture in the system, which corrodes metal. 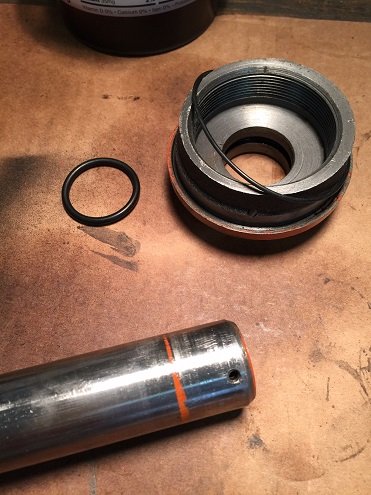 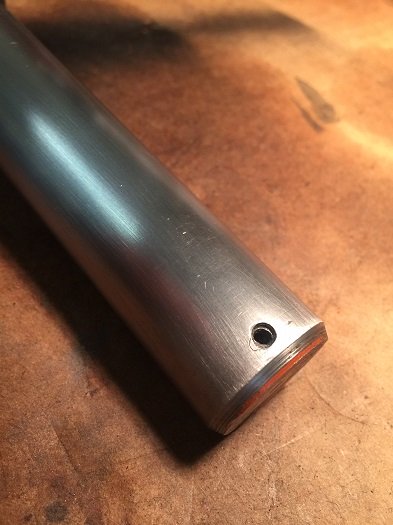 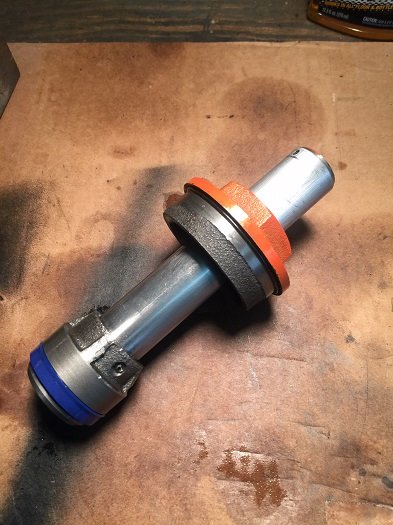 The (blue) seal on the end of the lift piston was 1/8" thinner than the old seal, which was swollen from age.

At the bottom of the pump is the pump piston, which is activated by the floor jack handle. 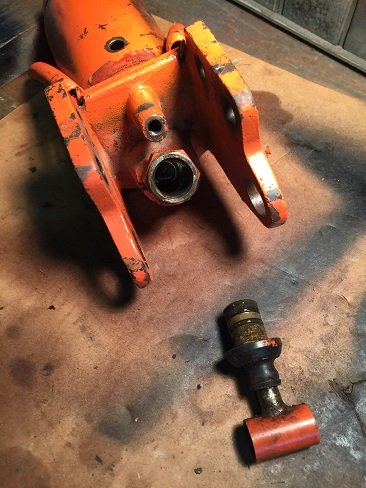 The pump piston has two seals which get replaced. 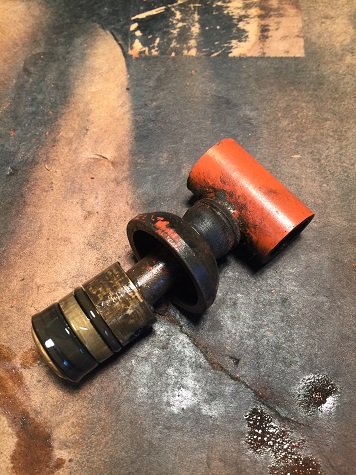 I was disappointed that a new dust boot was not included in the $40 repair kit. I ended up re-using the old ripped boot. 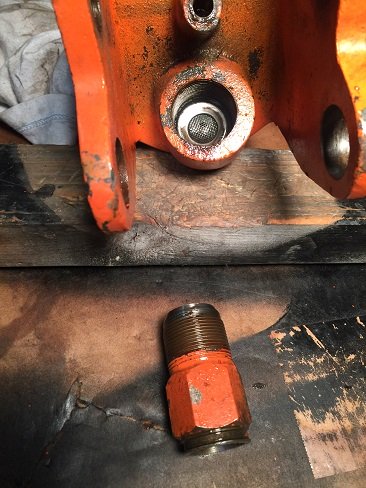 Unscrewing the small cylinder from the pump reveals an O-ring, metal washer, screen, and a small ball bearing, which acts as a check valve. 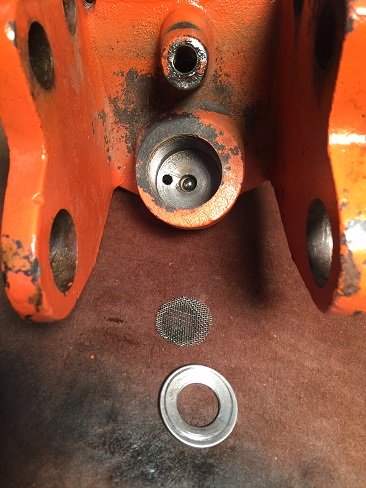 The screen acts as an oil filter. Make sure the ball bearing is in place before you put back the screen and washer. The new O-ring can now be installed. 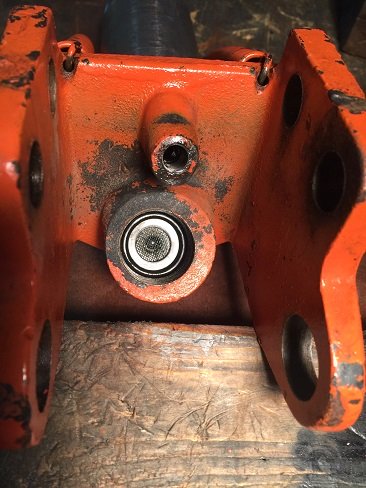 All parts were cleaned with brake parts cleaner and blown dry with compressed air before reassembling.

The first time I reassembled the pump and filled with fluid, it began leaking. So I took it back apart, saw where the leak was coming from (the 3" o-ring on the bottom), then carefully reassembled. 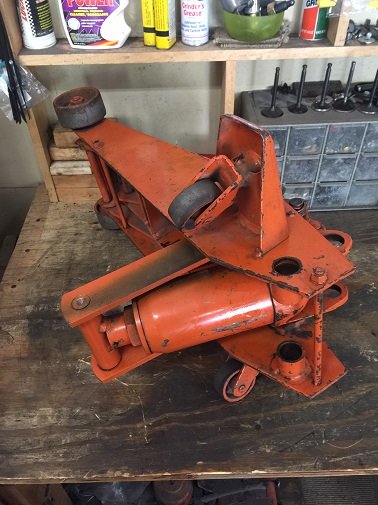 Getting the hydraulic pump back into the frame required a little strategy and a little muscle. 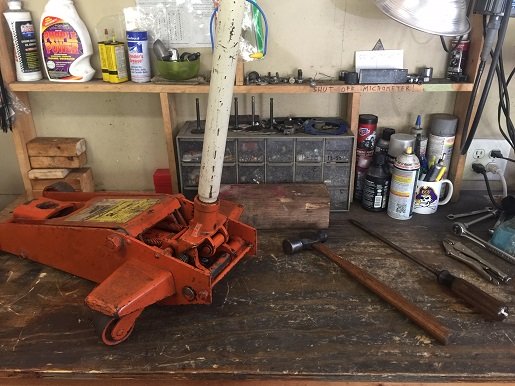 To test that the jack would hold weight under pressure, I took it out to the driveway and placed it under my truck. I lifted it up until one wheel came off the ground, then let it sit for a few minutes. 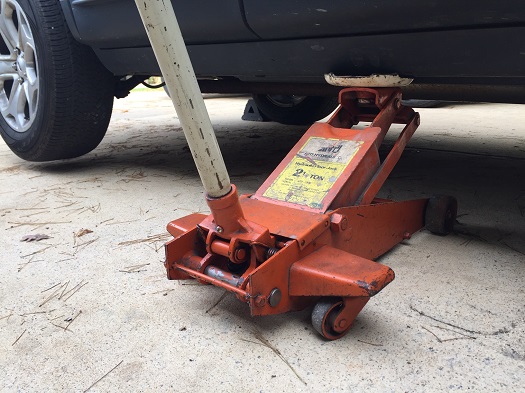 Before installing the new O-rings and seals, coat them in hydraulic oil.

Jack oil can be recycled with used motor oil.

Never crawl under a car that is supported only by a floor jack.

Always use jack stands when underneath a car.

Always release pressure on a hydraulic jack before storing it.

Unless you repair hydraulic pumps for a living, rebuilding an old floor jack will likely be a long and tedious task. If you can't or don't want to repair yours, buying a new one is the best solution.

Plan Right and Get Started