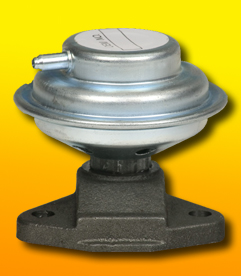 Although an EGR valve is an effective method of controlling oxides of nitrogen, by design it adversely affects engine performance. Your classic car engine was not designed to run on exhaust gas! To offset this unwanted situation, the amount of exhaust entering the intake system has to be carefully monitored and controlled. This is done through a series of electrical and/or vacuum switches, as well as the vehicle computer.

There are different types of EGR systems used on different engines. The vacuum-operated EGR valve is the most common seen on old cars. The valve is opened by vacuum, which is controlled through a solenoid, and closed by a spring. A solenoid controls the valve to open in proportion to throttle opening.

How Can I Tell If My EGR Valve Is Bad?

A faulty EGR valve (or related component) may leave the valve in either the stuck open or stuck closed position. The symptoms of a stuck-open valve are a rough idle with a lean air fuel mixture, running as if there's a major vacuum leak. The symptoms of a stuck-closed valve are an engine that has pre-ignition ping and knock. This is the result of high cylinder temperatures, caused by the lack of the cooling exhaust gas introduced into the chamber by the valve.

How to Test an EGR Valve

Can you access the valve, that is, can you stick your fingers in the small opening of the metal disc? If so, push on the diaphragm through one of the openings of the valve and see if it moves. If the diaphragm doesn't move with finger pressure, it's likely clogged.

Over years and miles, carbon deposits clog the EGR valve passages. You can replace it, but another option is to clean it. This requires removing the valve and disassembling it. A carburetor cleaner will help dissolve the carbon, but don't let the cleaner come in contact with any electronic components.

There are several different types of EGR valve configurations. They are still in use today, although not all late-model cars have one or need one.